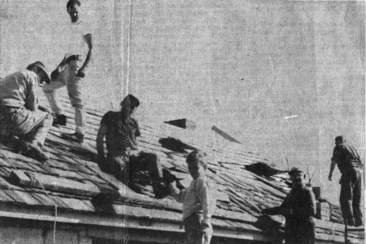 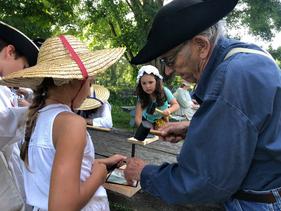 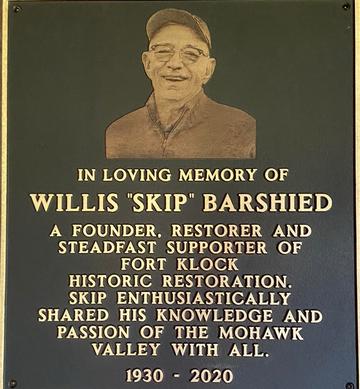 ...And Today,
Thanks to the tremendous efforts of the Muzzle Loaders Organization those many years ago, we now have a working Blacksmith Shop to demonstrate and educate students and public  about 18th century smithing. Shown above are Steve Gurzler working during the Young Pioneer Days days making musket balls and S hooks.  On the right is Skip and Michael.

It is with great sadness we announce the passing of Willis ‘Skip’ Barshied. Skip was a founding member and steadfast supporter of Fort Klock. He had a deep love of history and generously shared his knowledge with all he came in contact with. He will be greatly missed.

Not so many years ago, the ring of the hammer on the blacksmith's anvil echoed from every city, town and hamlet in our land. The glow of the forges and the puff of bellows were sights and sounds familiar to both young and old alike. Shops sprung up wherever there were oxen or horses to be shod or ironwork to be done and this was everywhere. The prosperity of whole communities depended upon the blacksmith and his skill in the ancient art of Ironworking. Among the wares furnished for everyday life were cooking utensils, farm and carpenter tools, hinges and door locks, musket barrels and locks, nails, and bolts, horse and ox shoes, sleigh runners and many other indispensible Items. In addition to this he must rely upon his own ability to produce many of the necessary items and tools for his own craft.

It was seldom indeed that a new community was established without establishing a blacksmith shop almost immediately. In most cases these shops quickly became the meeting place for men and boys of the community and from the walls were echoed views on all subjects from politics to the weather.  Much as modern service stations are, the smithy shops were often built close to the turnpikes. Here they made their bid for the horse shoeing and other trade which constantly rolled by their doors.

The Fort Klock blacksmith shop, which is presently being restored, was once one of these bustling shops along the turnpike. The old building has become a well known landmark but it is quite probable that the most modern passers-by have never known that it was once a blacksmith shop. The inside has escaped all modern alterations and the stone forges still remain as they were on the day the shop was closed. Although the road that runs so close by its doors is almost always referred to as Route 5, it has since its erection been known as the Mohawk Turnpike and has the distinction of being one of the earliest really good roads to run across New York State. It was first built in the early years of the eighteen hundreds and over it passed much of the overland travel as it pushed our civilization west.

Countless small businesses sprung up along the route, and it is said that nearly every house became a tavern or stage stop. There could be no better description of the travel that once passed the doors of the ancient shop than the following, which was written by S. L. Frey of Palatine years ago and was drawn from his own recollection.

"There was no railroad yet and the turnpike was very full of life, as all sorts of vehicles passed to and fro: Wagons with wheels six inches broad, drawn by six or eight - going down loaded with wheat or potash or ginseng, and returning with vast loads of flour and brandy and drugs, hardware, and a hundred other things. There were men and women on horseback, in chariot coaches, gigs and sulkies; there were great. Droves of cattle, and sheep and turkeys going off to the far off cities; and there were many emigrants from. New England in canvas covered vans seeking new homes and fortunes in the far west. On many of these were painted in great black letters OHIO or GENESSEE COUNTRY. Often these wagons traveled in trains and we could see them coming up the valley like ships under full sail.  When we peeped inside the curtains we could see the children, or the mother or the grandmother, perhaps, and the cat and all the furniture, the clock and the chest of drawers, for the wagon so large that there was quite a room inside."  These were the sights that were witnessed on the Turnpike about a hundred and twenty years ago by a small Palatine Bridge boy and recorded in the evening of his lifetime.  These too you might have seen if you stood in the Fort Klock Blacksmith shop door in that far off day.

It is not so very hard to visualize the horses and oxen tied to the rings which are still imbedded in the old shop walls even though many years have passed since they were used. Here the animals waited their turn to have new shoes set so that they might better serve their owners in the tilling of the soil or other important jobs which knew no other source of power than that which they alone could produce.

The Fort Klock shop had fallen into a sad state of disrepair over the years. The date of its erection is unknown but it is doubtless that it was built soon after the turnpike was opened. It is quite possible that some of the readers have information or early pictures of the shop. These would be a most welcome addition to the collection to be housed in the restored shop. Gifts of ether items connected with the early blacksmiths including tools or donations to help in the remaining restoration of the shop would be most appreciated. Considerable work has already been done to insure that the old landmark will endure for future generations. New window frames and sashes have been-put in place, all new trim and roof boards have been put on and the west side of the roof has now been covered with split shingles. The accompanying photo shows one of the shingling bees.

In all probability it will be several months before the shop is completely finished and equipped, but since a considerable quantity of tools are now on hand and others have been offered, the area will soon have a completely restored and equipped blacksmith shop to stand as a memorial to the oId time blacksmith and to another day and age when the word horsepower was not used in connection with tractor and automobile engines, but still referred solely to man's age-old friend, the horse.

Muzzle Loaders organization putting new roof on the blacksmith shop which is being renovated at Fort Klock.