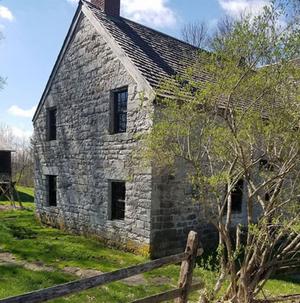 The Fortified home of Johannes Klock is owned and operated by Fort Klock Historic Restoration,  a group of dedicated, ordinary citizens working together to preserve this historic site.  The house while retaining original features, has been restored and in 1973 was designated a National Historic Landmark; a site "of exceptional value in commemorating or illustrating the history of the United States”. The organization is designated as not for profit (501-C-3), and  is an educational institution chartered by the New York State Education Department Board of Regents.  The primary goal of our organization is to preserve and accurately interpret the story of this unique historic site.

Klock's fortified homestead is nestled in New York's picturesque Mohawk Valley about one mile east of St. Johnsville. The stone structure has walls over 2 feet thick and is heavily loopholed on every side for defense , windows could be covered by sturdy wood shutters. A spring bubbling up in the cellar provided fresh water to the occupants. The self contained Fort Klock was utilized during both the French and Indian war and the American war for independence, as a place of refuge for family and neighbors, there are several Fortified homes in the valley. Johannes (John) Klock built the stone house for his family in 1750, the kitchen addition dates to the 1760's. Klock was a member of the Tryon county committee of safety, he was a militia member and  patriot. Owing to this and  given the location on the river and king's highway, the Klocks (and other valley residents)  may have played hosts to notable historic figures who traveled in the area during and after the revolution. Of note; the  Battle of Klock's field, which was the last battle of the destructive 1780 loyalist raid on the Mohawk and Schoharie valleys, is said to have been fought just to the west of the fort, on land owned by George Klock.

The home remained in the Klock family through the 1950's. After Lipe Klock passed away in the 1930's the family moved to town, unable to manage the farm.  Abandoned, it fell into disrepair. In 1953 Willis "Skip" Barshied Jr., and his newly organized Tryon county muzzleloaders ( 12 young men interested in collecting and shooting antique guns) were seeking a "home base", to become their meeting place. They found the property; run down,  and in dire need of repair. There were no doors or windows, the floors were rotted and walls crumbling, but Barshied  arranged to meet with then owner Alexander Don, a descendant of Johannes. Alex had long dreamed of restoring the old fort and preserving it for future generations.  He joined the muzzleloaders and convinced that they were sincere in their avowed purpose of a historic restoration of the fort, gave them a long term lease. The rent was 1 dollar a year for 20 years, with the option t renew for an additional 20 years.

A plan was put into action to repair and restore the old homestead. Windows, doors, floor boards, ceiling beams and fireplaces were replaced/repaired where needed. The crumbling walls were repaired. The Blacksmith shop was put back into service fashioning some of the iron hardware needed for the job, a more recent farm building was razed and brush was cleared. During the cleanup, the unthinkable happened, a brush fire spread to the abandoned Fort Klock School. The St.Johnsville school system still owned the unused one room schoolhouse and after the fire the Muzzleloaders bought the school house and restored it.

In 1957 Alexander Klock Don passed away. His wife Mable Don (also a member of the TCMO) deeded the Fort and property to the muzzleloaders.  The Fortified homestead was opened to the public for tours in 1961, in 1973 the name of the organization was changed to the Fort Klock Historic Restoration .and it was designated a National Historic Landmark.

The Dutch Barn built c. 1790 was donated to Fort Klock; in 1989 it was moved to the present site, reassembled and restored. The Dutch Barn, Little Red Schoolhouse c. 1825( restored and furnished), and Blacksmith shop stand today as a tribute to the intrepid, hard working "musketeers"  once known as the Tryon County Muzzleloaders.  The one room school is an example of a nearly vanished early American institution, while the smithy an example of a working industry which served the community as well as those travelling the roads on horseback or horse drawn conveyance.  A mid 19th century building once used as the dairy farm's "cheese house" has been converted to the caretaker's residence.